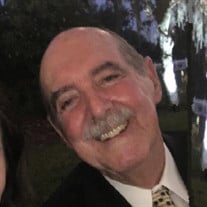 Bill McWhirter, 84, of Adger Alabama and Lake Wales Florida, passed away after a short illness at the Winter Haven Hospital in Winter Haven Florida on Wednesday, March 24, 2021. Bill was born August 10, 1936, in Winfield, Alabama to Edith N. and Alfred H. McWhirter. He graduated with a BS degree in Business Administration from Samford University in Birmingham Alabama. He began his career with State Farm Insurance in Birmingham in 1954 and retired from State Farm in 1998. During the course of his career, Bill was promoted and transferred to many locations across the United States. He was a Chartered Life Underwriter and a Chartered Property and Casualty Underwriter. He loved being part of the “State Farm Family” and over the years recruited many friends to work for the company. Bill was an avid golfer, winning many local club tournaments throughout the years, with two holes-in-one to his credit. He was very active in Toastmasters International, an ardent fisherman, and a skilled woodworker. A lifelong member of the United Methodist church, he was an example to his family of community service, hard work and perseverance. He was preceded in death by his high-school sweetheart and wife of 63 years Eva Gaye Parker and his brother Jimmy Ray McWhirter. He is survived by his sister Susan Breen; three children, Vickie Cooper, Bruce McWhirter and Andy McWhirter; 6 grandchildren, Erik McWhirter, Shannon Hippensteel, Ethan McWhirter, Erin McWhirter, Parker Bell Cooper, and Dale Morgan Miller; and one great-grandchild Perry Bruce McWhirter; Nieces and Nephews, Debra Parker Melanson, Glen Parker, Danny McWhirter, Ginger White, Amanda Sheff, and Jonathon McDonald. Services will be graveside at Highland Memorial Gardens – 18th Ave, Bessemer, Alabama at 11:00 AM, April 3, 2021, with lunch to follow at the Sylvan Springs Community Center, 130 Rock Creek Rd, Mulga, AL. Visitation will be April 3, 2021 from 9-to-10:45 AM at Peoples Chapel 195 Brooklane Dr, Hueytown, AL

The family of WILLIAM "BILL" McWHIRTER created this Life Tributes page to make it easy to share your memories.

Send flowers to the McWHIRTER family.