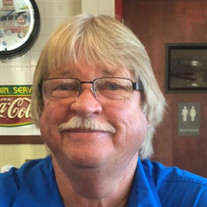 William Van Johnson, Age 63 of Hueytown, passed away Monday evening October 4, 2021.Van was born on August 30, 1958 in Sylacauga, AL. where he lived until his mid 30’s when he moved to Hueytown, AL after meeting the love of his life, his wife (Debra Lovell Johnson) and this is where he has resided since. Van worked in the construction industry most of his life where he started out as an ironworker and worked his way to the top to management of field operations. Van was a tremendously loyal and hard worker. He loved to work in order to provide for his family and build a legacy he could pass on to the family. Van was very strong-willed, kindhearted, wore his heart on his sleeve, give you the shirt off his back if it helped you type of person and was always true to who he was whether you liked him or not. He always told stories to make all of us laugh, he always wanted to make people feel good around him and simply enjoy life. His pride was his family, it was everything to him. He was a devoted and loving husband, father, grandfather, brother, uncle and friend to all that knew him. It is a true understatement of how much he will be missed. But for now, may you rest in peace in the arms of the angels, until we see you again! We love you!Van was preceded in death by his grandparents, his parents John Henry and Geraldine Johnson, his brother Johnny Ray Johnson, his brother-in-laws Jimmy Crawford, Bill Meherg and nephew Glenn Meherg. Van is survived by his wife of 27 years Debra Lovell Johnson, son Brian (Shea) grandchildren Kelsey and Connor. Justin (fiancé Brooke Jennings), Dylan and Amber Sparks Upton (Grant) Kade & Belle. Three Sisters, Carol Meherg, Catherine Crawford, Gale (Ronnie) Holland, brother Kenneth Charles Johnson and a very long list of nieces, nephews, cousins and special friends.The visitation will be from 4:00pm - 7:00pm Sunday October 10th at Valley Creek Baptist Church. A service will be held in his honor at 11:00 am at the church. Burial will follow at Valley Creek Cemetery.Pallbearers: Craig K. Sparks, Wesley Stewart, Terry Williams, Daryl Harper, Tim McDonald and Matt Pardue. Honorary Pallbearers: Tim Myers and Larry Snow

William Van Johnson, Age 63 of Hueytown, passed away Monday evening October 4, 2021.Van was born on August 30, 1958 in Sylacauga, AL. where he lived until his mid 30&#8217;s when he moved to Hueytown, AL after meeting the love of his life, his... View Obituary & Service Information

The family of WILLIAM VAN JOHNSON created this Life Tributes page to make it easy to share your memories.

Send flowers to the JOHNSON family.