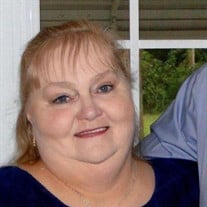 Tommie Lou Goodwin, 68 of Birmingport AL, went home to be with the Lord on Thursday, September 23rd, 2021 while holding the hands of the second and third loves of her life (Sons, Don and Shane Goodwin) and surrounded by family and friends near and far. Her number one love, lifelong sweetheart, and husband of just over 50 years (Married 8/27/1971) was Donnie R. Goodwin who preceded her in death by less than a week. Her heart just could not make it without him another day and they are now together again. She was a Christian and she started her life with Donnie soon after she graduated from Oak Grove High School in 1971. In 1972, started the job she had always dreamed of as a Mom. Her other love was Auburn University and she wore it with pride come rain or come shine. Tommie Lou was one of a kind but cut from the same cloth as her fun-loving Dad - George Wood. She was an amazing woman who was a hoot to be around and brought laughter and joy everywhere she went. The only exception being the ballpark (primarily baseball & football) if you were an umpire or referee that got a call wrong. If fact, she was a tireless supporter and number one fan of her sons and if your wrong call impacted them or their team, she probably got kicked out of the park and loved every minute of it. Many coaches consulted her before making complex player moves and/or for rule questions. She never wanted to be anyone other than exactly who she was, and people loved her for it. Over the years she held various jobs as a cashier where her favorite part was interacting with people. It gave her a platform to share her humor, love, antics and she touched the lives of many. Her smile and laughter would light up a room and there are not enough words to do her justice. She was gifted with an ability to make people happy and you have never met someone so comfortable with children. She truly enjoyed being with them and making them laugh. She would stop at nothing to make a child smile. For a long time, her sons didn’t give her any grandchildren but boy oh boy when they finally did - She made up for lost time with a whole lot of pent up love & joy. Being a fun loving Granna was the highlight of her life and the pure joy she shared with her grandchildren was unmatched. There will never be another Tommie Lou and while losing her on earth is extremely sad for those of us left behind, we are immensely blessed for the time we did get. Tommie Lou Goodwin was preceded in death by her husband of 50 years, Donnie R. Goodwin Sr.; parents George and Mae Wood; grandchildren Jett & Campbell; grandparents, Tommie P. & Vada Jett, Leon & Carrie Wood; She is survived by her 2 beloved sons, Don (Jennifer) and Shane (Brandi); sister Georgia Burr (Randy); brother, Mike (Wendy) Wood; adored grandchildren, Justin, Jonathan, Kaitlyn, Chance, Memphis & Ryman and a host of nieces and nephews. The funeral service will be at Peoples Chapel Funeral Home Tuesday, September 28st with visitation 10:00 AM – 11:00 and the service, officiated by Buddy Price, will follow. She will be laid to rest at Oak Grove Community Church beside her husband and other family members. Pallbearers: Bo Hicks, Michael Wood, Mathew Wood, Mason Wood, BJ Sharpton, Eric Dagnan, Justin Payton, Jonathan Goodwin; Honorary Pallbearers: Larry Dagnan, Dylan Dagnan & Gage Robinson.

Tommie Lou Goodwin, 68 of Birmingport AL, went home to be with the Lord on Thursday, September 23rd, 2021 while holding the hands of the second and third loves of her life (Sons, Don and Shane Goodwin) and surrounded by family and friends near... View Obituary & Service Information

The family of TOMMIE LOU GOODWIN created this Life Tributes page to make it easy to share your memories.

Tommie Lou Goodwin, 68 of Birmingport AL, went home to be with...

Send flowers to the GOODWIN family.