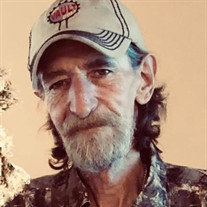 Thomas Douglas Mann, Age 63, of Rock Creek, Al, passed unexpectedly on Wednesday, December 2, 2021. Tom was a man whose love was truly unconditional. Anyone that knew him, cherished his company. Nobody was a stranger. He was easy to talk to, and radiated empathy. Being in his company was a comfort. He had a peace in his countenance that could calm a crowd. He was a man of few words, and always gentle. His actions always spoke louder than words. Tom was a simple man, not impressed much by technology. He would rather watch the Sun rise from a green field, and set at the end of his bobber. He never asked for anything yet always gave everything. Tom was quick to help anyone in need. He was THE “Jack-of-all trades.” Tom was a skilled Welder, Mechanic, Roofer, and much more. In his free time, he enjoyed all things outdoors, "piddling," he loved working with wood and building “gifts” for his children and friends. Tom will be missed greatly amongst his friends and family. Tom is preceded in death by his father Audrey Douglas Mann, his mother Earlean Smart, his stepfather James A. Smart, his sister Deborah Mann, and his brother Calvin Mann. Thomas is survived by his four children and their spouses, Tamara Mann Watts (Kenneth), Crystal Mann Mabe (Robert), Courtney Nicole Mann Burrage (William), Zechariah Mann (Kim); sixteen grandchildren Ashley Watts, Morgan Watts, Jesslyn Watts, Jaylen Watts, Taylor Watts, Hanna Vines, Braelyn Vines, Olivia Mabe, Remington McDonald, Peirsun Burrage, Brystan Burrage, Asher Burrage, Finn Burrage, August Burrage, Bonnie-Kate Tomlin Burrage, Fisher Mann; two great grandchildren Rylan Ferdin and Asher Duncan; his brothers Bruce Smart, Gary Smart, Phillip Smart, David Mann; and sister Diane Humphries. The visitation will be from 12:30 PM until 2:00 PM Tuesday, December 7, 2021 at Peoples Chapel Funeral Home. The funeral service will be at 2:00 PM at the Funeral Home. Burial will follow at Sylvan Springs United Methodist Cemetery. In lieu of flowers the family asks that donations be made by calling Peoples Funeral Home and requesting to donate to Thomas Mann’s funeral costs.

Thomas Douglas Mann, Age 63, of Rock Creek, Al, passed unexpectedly on Wednesday, December 2, 2021. Tom was a man whose love was truly unconditional. Anyone that knew him, cherished his company. Nobody was a stranger. He was easy to talk to,... View Obituary & Service Information

The family of THOMAS DOUGLAS MANN created this Life Tributes page to make it easy to share your memories.

Send flowers to the MANN family.