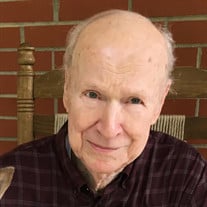 Thomas Jackson Hunt, 94, died Friday, April 23, 2021, after a lengthy battle with Alzheimer’s disease. Born in Seagrove, N.C., on Oct. 11, 1926, he was the youngest child of George W. and Eliza Jackson Hunt. He was preceded in death by his wife of almost 63 years, Mary Evelyn Gilbert Hunt.  The couple were longtime residents of the Concord community, west of Birmingham. T.J., as he was known by family, was born into a farming family in Randolph County and longed to return to his beloved Seagrove even to his final days. During WWII, he served in the Army Air Corps and afterward studied business administration at the University of North Carolina at Chapel Hill, graduating in 1951. He met Mary while working in Birmingham for Sealtest Dairy. The couple relocated to the Carolinas for some years for his jobs in the petroleum industry. A position at Continental Can Co. in Dolomite drew them back to the Birmingham area in 1965. After the CCC plant’s closure he worked for Koppers Industries and finally retired after nearly a decade as Administrative Services Officer for Alabama’s Donaldson Correctional Facility. While there, he devoted personal time toward setting up prison ministries and education opportunities for the inmates. Tom and Mary were dedicated members of the Rock Creek Church of God. He served in a number of roles over the decades from treasurer, to usher to several terms on the Board of Trustees. He also coached Little League baseball, church league youth basketball and volunteered with Boy Scouts. After his retirement, he did some freelance writing, mostly about life on a farm. In the Sunny Dell subdivision where he lived, he was known for long walks with his beloved rat terrier, Peggy, and sharing generously tomatoes and bell peppers from his annual garden. Thomas was the 13th and last child born into his family. All are deceased. Survivors include children Vickey Williams of Birmingham, Ken Hunt (Rhonda) of Madison, and Rick Stephens of San Antonio, Texas; six grandchildren and numerous great-grandchildren; and much-loved nieces and nephews. Due to the continued COVID 19 pandemic, there will be no public memorial at this time. The family will have a graveside service at the Rock Creek Church of God, 1001 Park Road, Bessemer, on Monday, April 26, 2021. Memorials may be made to the church.

The family of THOMAS JACKSON HUNT created this Life Tributes page to make it easy to share your memories.

Send flowers to the HUNT family.