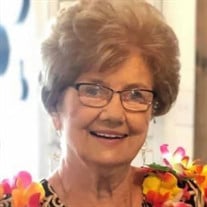 Shirley Martin Bush, 86, born June 6, 1935, of Hueytown passed away June 17, 2021.  She was preceded in death by her husband of 54 years, Gerald W. (Jerry) Bush, sister, Charlotte Crowder and brother, Dr. Charles Martin.  She was a graduate of Brookwood High School where she was a member of the Beta Club and was in the high school band. She graduated "Cum Laude" from Athens State and majored in Vocational Education.  She also received a master’s degree in Education from the University of Alabama.  She taught Business Education at Bessemer State Technical College and later worked as the Office Manager at Simon Williamson Clinic. She was a charter member of Hueytown Baptist Church where she taught Sunday School, sang in the choir, served on various committees, and organized the widow’s group “God’s Chicks”. She served with the Alabama Church training department and was a member of Alabama Baptist Church Secretaries; she was the Church Secretary at Fairfield Highlands Baptist Church, North Highlands Baptist Church and Hueytown Baptist Church.  She was awarded a lifetime member of the PTSO when she served as president of North Highlands Elementary. She served on the advisory board for business education at Vestavia High School and was president of the following organizations: Alpha Lambda Chapter of Delta Kappa Gamma, XI MU Chapter of Beta Sigma PHI and the North Highlands Women’s Missions Union.  She was a member of the National Secretaries Association, Birmingham Medical Group Management Association and was listed in Who’s Who among American Women’s Professional Group. Shirley enjoyed life and lived it to the fullest.  She enjoyed singing, gardening, and traveling.  She would often tell stories of when she was a child. She described herself as a skinny little girl who always wore glasses.  Her parents owned Martin’s Grocery in Woodstock, next to their family home.  Shirley was the middle child and helped care for her younger sister while her parents ran the store. She told stories of how her Daddy would drive two hours to Loveman’s Department Store in Birmingham to buy her fancy dresses.  After high school she worked at Loveman’s. One of the family’s favorite stories she told was about riding the bus back and forth to school and a girl would call her ‘four eyes.” One day Shirley had enough and told her girlfriend sitting beside her “hold my earrings and my glasses.”  Shirley took care of the situation and never had any more problems from the girl. She joked and said, “I knew how to fight because I had an older brother.” She had a great sense of humor and could be a little sneaky at times.  Shirley loved any kind of shrimp and homemade fudge; she would always sneak some of her niece’s homemade fudge at family gatherings to take home. She loved to travel and organized many trips during her lifetime. She would also organize trips for her church.  She made many special friends over the years while her husband would lead the music at various churches.  For many years she owned a place at Venture Out in Panama City. After retirement she and Gerald would spend a lot of time there. Shirley had many lifelong friends and would often invite them over for dinner and to play cards or dominos. She was part of the Red Hat Society and loved to play Bunco.  Shirley’s favorite restaurants were The Bright Star and Cypress Inn, she took any opportunity to dine there.  She was a true southern lady who loved a good party. Shirley hosted many wedding teas, rehearsal dinners and wedding receptions at her home. She loved people and loved her family well.  She lived in the same house for 56 years and jokingly said “I know I am a pack rat”, however if anyone needed something, most likely she would have it in her basement.   Shirley is survived by her loving son, Gregory Wayne Bush and many nieces, nephews, great-nieces, and great-nephews.  She also leaves behind her beloved niece Carla Donaldson, her special nephew, Dr. William Martin, whom she considered her second son, and her special companion for the past 8 years, Mr. Austin Chandler.   Visitation will be at Peoples Funeral Home in Hueytown on Tuesday, June 22, 2021 from 1:00 to 2:00 with the funeral beginning at 2:00.  Burial will be at Highland Memorial Gardens.  Chris Burns officiating.

Shirley Martin Bush, 86, born June 6, 1935, of Hueytown passed away June 17, 2021.  She was preceded in death by her husband of 54 years, Gerald W. (Jerry) Bush, sister, Charlotte Crowder and brother, Dr. Charles Martin.  She was a graduate... View Obituary & Service Information

The family of SHIRLEY MARTIN BUSH created this Life Tributes page to make it easy to share your memories.

Send flowers to the BUSH family.