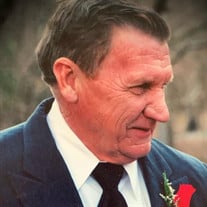 With great sadness we announce the passing of Richard Eaton, our loving and devoted father and friend to all whose lives he touched. Richard Eaton of Shady Grove, Alabama passed away on Friday April 23, 2021 after reaching the age of 80 years old. After months of failing health, he died peacefully within his home with his Beloved Ms. Laura, children, and family by his side. Richard was born in Windham Springs, Alabama on January 27, 1941 to Curtis and Nora Eaton. As a very young man, he learned the value of hard work. Using this valuable trait and his gift of gab, he opened Eaton Electric Motor Company in 1976. He would work there as an Industrial Electrician for the next 45 years until shortly after his 80th birthday. This was his passion and what he loved to do. Many in his field referred to him as the “best in the business.” Never meeting a stranger and always willing to give a helping hand, Richard touched the lives of many. Richard loved to travel and play music. During his life, he played the acoustic and bass guitar in numerous bands. With his bandmates and friends by his side, they performed in countless community centers over the years doing what he referred to as “picking and grinning.” Richard traveled extensively, seeing all 50 states and creatively incorporating Canada and Mexico into his travels. He never made a reservation and would simply keep driving until he could find a vacancy. His children would say, “Travel at your own risk. Once you enter the car, you never know where you will end up.” Richard was a strong, good, and proud man who always provided for his family. For someone who required so very little, he left SO very much to the world! He will always be loved, remembered, and truly missed by many! Mr. Eaton was preceded in death by his parents Curtis and Nora Eaton; and brother, George Eaton (Doris). Mr. Eaton was survived by his loving wife, Laura Lindsey; children, {daughter}Wanda Misko (Billy), {son} Darren Eaton (Terry), {daughter} Cindy Carter (Jerry), and {son} David Eaton (April); brothers, Kenneth “Red” Eaton and Leonard Eaton (Brenda); sisters, Juanita Hull (Ronald), and Jo Ann Hicks (Ronald); grandchildren, BJ Brownson, Cody Brownson, Chelsea Berger (Zac), Gage Capleton, Morgan Carter and Chance Carter; pets, Kitty Girl and Kitty Boy. The funeral will be Tuesday, April 27, 2021 at 2:00 P.M. at Peoples Chapel with visitation from 12:30 until 2:00 P.M. , burial will follow at Highland Memorial Gardens.

With great sadness we announce the passing of Richard Eaton, our loving and devoted father and friend to all whose lives he touched. Richard Eaton of Shady Grove, Alabama passed away on Friday April 23, 2021 after reaching the age of 80 years... View Obituary & Service Information

The family of RICHARD P EATON created this Life Tributes page to make it easy to share your memories.

With great sadness we announce the passing of Richard Eaton,...

Send flowers to the EATON family.