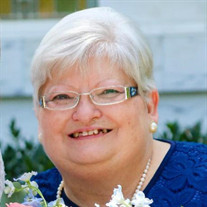 Rebecca Nina Morris White, 69, of Bessemer Alabama, passed away on Monday February the 15th after a brief battle with COVID-19. Becky was born on October 13th, 1951 to Cecil and Doris Morris. Her Homecoming in 1967 was her first date with her Highschool sweetheart, James Steven “Steve” White. They continued to date through his graduation in 1968 and in 1969 he sailed away with the Navy. A year later he returned for her hand in marriage, but not before she graduated from Bessemer High School in 1970. They continued their Naval service in Virginia Beach, Norfolk, Newport, and Philadelphia. In 1974, Becky and Steve were sealed for time and all eternity in the LDS Washington DC temple along with their first two children, James “Jim” Steven White II, and Andrea Rebecca White Passmore. They went on to have two more bouncing baby boys William Spencer White and Daniel Scott White. Once their service was complete, they returned to Alabama where a short time later they bought their life long home (AKA the White House) on Dartmouth Ave. Steve worked two jobs and went to school, allowing her to put all her energy into serving her family and community. Once he graduated, she began Nursing school at the University of Alabama in Birmingham. After graduating from UAB, she began her 10- year career as a RN; working at Princeton and UAB Medical West. After retiring, Becky spent her time crafting in the service of others. She made hats for NICU babies at St. Jude and Children’s Hospital; blankets for angel babies; crocheted and knitted countless hats, scarves, sweaters and blankets for anyone who needed it; hand stitched a quilt for each of her loved ones; and created imaginative ‘Monkas’ spreading her spunky, quirky and loveable joy to everyone around her. Becky was predeceased by her parents, Cecil and Doris, siblings Rex Morris, Rita Clayton, Reesa Payne, and Robin Morris. She is survived by her husband Steve; her brothers Rodger Morris, and Randy Morris; her four children, Jim (Angela “Angie” McFarland), Andrea (Scott Passmore), Spencer, and Daniel (Loren Brown); her ten grandchildren, Leanna, Kayla, Trace, Taylor, Brooke, Barrett, Chad, Ty, Gabriel and Emmerson; and her great grandchildren, Dakota, Allora and Eli (expected April 2021). The graveside only service will be held on Friday, February 19th, 2pm at Kimbrell Cemetery, on Eastern Valley Rd. in McCalla. In lieu of flowers the family requests donations be made to Disabled American Veterans (DAV), Children’s Hospital in Birmingham, or St. Jude Children’s Research Hospital.

Rebecca Nina Morris White, 69, of Bessemer Alabama, passed away on Monday February the 15th after a brief battle with COVID-19. Becky was born on October 13th, 1951 to Cecil and Doris Morris. Her Homecoming in 1967 was her first date with her... View Obituary & Service Information

The family of REBECCA NINA MORRIS WHITE created this Life Tributes page to make it easy to share your memories.

Send flowers to the WHITE family.