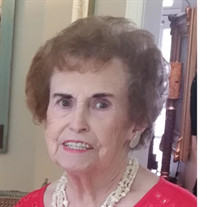 Peggy Ford Crocker, age 83, passed away on June 7, 2021. She was a loving wife, mother, grand and great-grandmother and aunt. She was born on July 8, 1937 in Concord, AL to William Wilson and Verda H. Ford. She grew up in Concord and graduated from Hueytown High School in 1955. She married Conrad Crocker later that year and they were married more than 65 years this year. Peggy retired from U. S. Steel after which she traveled extensively with her husband during his working years around the southeast and to Auburn events and vacations with family and friends. Peggy was preceded in death by her husband Conrad Wayne Crocker and her parents, William and Verda Ford. She is survived by her children, Greg (Cindy) Crocker, Belinda (Robert) Russian; her sister, Gloria (Steve) Gilbert; her brothers, Billy Ford, Johnny (Ann) Ford, Ralph (Cheryl) Ford, and James (Sherri) Ford; her grandchildren, Courtney (Chad) Cox, Robert Corey Russian, Kayla Russian, three great grandchildren, and numerous nieces and nephews. Peggy grew up the oldest of six children and she took her role as the big sister very serious. Her siblings spent many years together in the Concord community with she, Conrad and their two children. They later moved to Pleasant Grove after their children married and moved away and then to Wetumpka, Al. She and her loving husband Conrad were very rarely apart. Peggy was a very dedicated, hard-working home maker while also working a full-time job for many years. Hard work, getting things done and taking care of what you had was important to her and Conrad. She loved keeping her home spotless and took great pride in her house and loved doing things for and with her family. When her children went off to college, she and Conrad would make the trip there regularly for big tailgate parties and get-togethers for food and fellowship with the extended family. Peggy will be missed greatly by her family and friends and Conrad will be so happy to be reunited with her again. A graveside service will be held on Friday, June 11, 2021 at 11:00 A.M. at Forest Grove Memorial Gardens in Pleasant Grove, Al. In lieu of flowers the family requests contributions be made to Taylor Road Baptist Church, Senior Adult Ministry in Montgomery, Al.

Peggy Ford Crocker, age 83, passed away on June 7, 2021. She was a loving wife, mother, grand and great-grandmother and aunt. She was born on July 8, 1937 in Concord, AL to William Wilson and Verda H. Ford. She grew up in Concord and graduated... View Obituary & Service Information

The family of PEGGY FORD CROCKER created this Life Tributes page to make it easy to share your memories.

Send flowers to the CROCKER family.