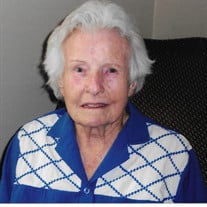 Marjorie Vernice Handley Vines, age 98, of Rock Creek, passed away on August 13, 2019 due to Alzheimer's Disease. While Alzheimer's Disease consumed the end of her life, that is not the whole of her life. She married Leroy Vines in 1939 and had three children, five grandchildren and four great grandchildren. Family and church were the center of her life. She was a life-long member of Union Hill Baptist Church. Her focus early on was on family life and expanded when she began working in the public school cafeteria system, eventually becoming a manager. She had a talent for preparing meals for large groups in the cafeteria system, organizing weekly meals for the Union Hill Baptist congregation and for family gatherings. Always sending meals out to the homebound in the community prior to the family meal. She was also passionate about quilting and sewing and made numerous quilts with her local group of quilters. Among her other interests were vegetable gardening, canning and fishing on the Warrior River. She was a smart and busy woman, but, always, until the last years, made time for the yearly trip to her beloved Gulf Shores where she would fish from the beach and have a fish fry from the catchings! She is preceded in death by her husband Leroy Vines; parents Wilson and Alta Handley; siblings Joe Handley, Vera Phillips, Dorothy Mitchell, and Glenn Handley. She is survived by her daughter Doris Mays; two sons James Vines (Lynnette) and Larry Vines (Sylvia); five grandchildren Mike Mays, Becki Dickson (Ken), Jennifer McLane (Jason), Jason Vines (Jessica), Robert Campbell (Sara); four great grandchildren Patrick Mays, Cassie Mays, Chandler Campbell, and Alden Campbell; sister Mae Weaver; and many nieces and nephews. She was beloved by many, believed in service to others and committed to family. The family wishes to acknowledge her long-time caregiver, Mary Hurst, for her commitment and care. Also, to the team at Compassus Hospice for their invaluable aid in the last season of her life. The visitation will be Thursday, August 15, 2019 from 12:30 PM until 2:00 PM at Peoples Chapel Funeral Home. The funeral service will be at 2:00 PM at the Funeral Home, with the Rev. Howard Thompson officiating. Burial will follow at Rock Creek Church of God Cemetery.

The family of MARJORIE VERNICE HANDLEY VINES created this Life Tributes page to make it easy to share your memories.

Send flowers to the VINES family.