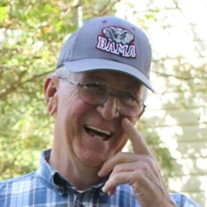 Lonnie Edward Ezell, 78, of Hueytown, Alabama, passed away June 20, 2022, with his family by his side. He was born to the late Lawrence and Janet Ezell April 12, 1944. He graduated from Jones Valley High School in 1962. Lonnie was a loyal member of the Hueytown First United Methodist Church and devoted his life being the hands and feet of Jesus. He retired from U.S. Pipe after 50 years of dedicated service and lived a full life with his family and friends. Lonnie adored his wife Barbara Wilson Ezell. Together they shared 58 years of marriage with 3 wonderful children, Gregory Scott (Karen), Connie Michelle (Mike), and Stacy Marie. His family grew to include 6 grandchildren and 2 great-grandchildren, with another on the way. He loved to share a good story and filled every room with laughter and joy. His love for fishing and riding motorcycles was one way he spent time with the people he loved, which also never failed to include a good meal. Our beloved "Pawpaw" had a true zest for life. He was the one who created the nicknames for every grandchild without fail. Just ask, they will all tell you they rarely heard their true name. Even during church service, the grands knew, Pawpaw had the peppermints, so you must sit with him. Any sentence that started with "Now listen" meant just that, knowledge was on its way. Lonnie is preceded in death by his wife Barbara Ezell, son Gregory, daughter-in-law Karen Ezell, and granddaughter Malorie Ezell, his brother Larry Ezell and his parents Lawrence and Janet Ezell. He is survived by his daughters Connie Belcher (Mike) and Stacy Ezell; Grandchildren Tyler Gore (Jessica), Chase Ezell (Allyson), Brittany Cirel (Colin), Bailey Walker, and Aaron Belcher; and great-grandchildren Barrett Ezell and Olivia Ezell. The visitation will be Friday June 24, 2022, at 10 AM at Hueytown First United Methodist Church. The service will begin at 11 AM at the Church. Burial will follow at Pleasant Ridge Cemtery. In lieu of flowers, please consider donating to Hueytown First United Methodist Church (205) 491-3421.

Lonnie Edward Ezell, 78, of Hueytown, Alabama, passed away June 20, 2022, with his family by his side. He was born to the late Lawrence and Janet Ezell April 12, 1944. He graduated from Jones Valley High School in 1962. Lonnie was a loyal member... View Obituary & Service Information

The family of LONNIE EDWARD EZELL created this Life Tributes page to make it easy to share your memories.

Send flowers to the EZELL family.