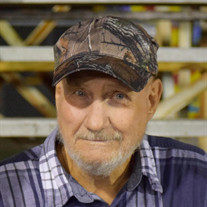 Larry Wilson Vines, age 76, of Rock Creek passed away on Sunday, November 29, 2020. He won his first battle with cancer and we were blessed with twelve more years, but the cancer returned and we lost this time. He was born July 27, 1944 to Leroy and Marjorie Vines. He graduated from Hueytown High School, Class of 1962. After school, he started working at Pullman Standard then went into the Army. When his service in the Army was done, he went back to work at Pullman until it closed. Then he worked several different jobs to support his family and finished his work career at Trinity Industries. He loved watching sports, especially Alabama football. Every weekend you could find him sitting in his recliner rooting for his team. When he was not working or pulling for Alabama, he loved hunting, fishing, and gardening, later teaching his son to love all these things as well.  After he retired from hunting and fishing, he and Jason would work in the garden. Every Summer you could see Larry and Jason riding two different tractors as they tilled the land preparing the field for planting. They continued this father son tradition for many years, up until this last summer, when Larry started slowing down and felt tired. It was then we found out the cancer had returned, and Larry was determined to fight and win the battle again. But God has plans we neither know or understand and he called him home in the early hours of the morning as he slept, with his family by his side. Larry was preceded in death by his parents Leroy and Marjorie Vines. He is survived by his wife of 49 years, Sylvia, and his children, daughter Jennifer McLane (Jason) and son Jason Vines (Jessica Ferguson), sister Doris Mays, brother James Vines (Lynnette), the great and great, great nieces and nephews who became the grandchildren of his heart, Lorelei, Erik, Angel, Bailey, Ellie and Jase. He was loved by all, friends and family and each have their own special moments to remember him by, until the day we are reunited again. The family would like to say a special thanks to the team at Affinity Hospice. They took amazing care of Larry in the last weeks of his life. We appreciate them for all they did, especially his nurse Sonna Bishop. She was a bright spot in a dark time. Visitation will be Wednesday, December 2, 2020 from 12:30 PM to 2:00 PM at Peoples Chapel Funeral Home. The funeral service will be at 2:00 PM, at the Funeral Home, and be officiated by Brother Wayne Absher.  Burial will follow at Rock Creek Church of God Cemetery.

Larry Wilson Vines, age 76, of Rock Creek passed away on Sunday, November 29, 2020. He won his first battle with cancer and we were blessed with twelve more years, but the cancer returned and we lost this time. He was born July 27, 1944 to... View Obituary & Service Information

The family of LARRY WILSON VINES created this Life Tributes page to make it easy to share your memories.

Send flowers to the VINES family.