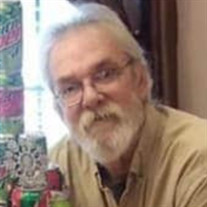 Larry Noland Brown, 66, of Milton, FL, formerly from Birmingham, AL, passed away July 28, 2020. Larry was born on December 8, 1953, to Melvin “Buck” and Margaret Brown. He was raised in Pratt City, AL and was a proud member of the Pratt City Church of God. He proudly served his country by joining the military before graduating high school, serving in the U.S. Army during the Vietnam War. His time was served in Germany as a teletype operator. He worked 12 hr shifts with very little R & R. His platoon very rarely got to leave the base. When he got out of the military he begin his civilian career working for South Central Bell. He worked his way up to being a Cable Splicer. After leaving South Central Bell he held numerous other jobs. He loved his family very much but especially his mama. He also adored his son Adam. His last several months of life he was able to make things right with his Savior. He wanted to make sure that he would see his mama again. To know him was to love him. He made a huge impact on anyone he came in contact with. Even his Covenant Care case manager and his home health nurses expressed their love for him. They too were saddened by his death. Larry was preceded in death by his wife Carol A. Brown, his parents Buck “Paw Paw” and Margaret “Grandma” Brown; brothers Mutt Brown and Jimmy Brown; and sister Wanda Whitson. He is survived by his son Adam Bryan (Amanda), of Milton, FL; sister Linda Hosch, of Adamsville, AL; and a host of nieces, nephews and extended family. There will be a memorial service, August 15, 2020, at 10:00 AM at Midway Cemetery, Adamsville, AL. Memorials may be made to either Adamsville Church of God, Adamsville, AL, or Covenant Care, Pensacola, FL.

The family of LARRY NOLAND BROWN created this Life Tributes page to make it easy to share your memories.

Send flowers to the BROWN family.