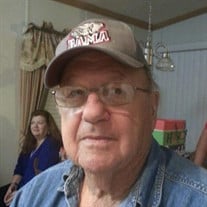 Jimmy C. Forriester, 83, of Hueytown, Al. passed away October 16, 2020. Jimmy was a graduate of Hueytown High, class of 1956. He served 3 years in the Army, stationed at Fort Hood, TX., returning to Hueytown Ala., marrying the love of his life in 1961, and raising a family. He was a member and Deacon of Calvary Baptist Church in Ensley for 35 years. He served on the Hueytown City Council for 2 Terms, becoming the first to hold the title of Council President. He was a heavy equipment operator working out of Local Union 312 until his retirement. Jimmy chose to spend his years after retirement working on the local Jefferson County Search and Rescue team, rising to the rank of Captain. His favorite task as part of the Search and Rescue team was participating in the annual Hueytown and Pleasant Grove Christmas parades. In the fall he could be found cheering on his beloved Crimson Tide. Jimmy was a loving and supportive husband to his wife, who was his high school sweetheart, although one of his greatest accomplishments was being a father to his 2 children and later as pawpaw to his 3 grandchildren. His children thought of him as their hero and even as adults they still thought of him this way. He was always there for his family through thick and thin. He dearly loved his family and was deeply loved by his family in return. He will be greatly missed by not only his family, but by all that knew him. He is preceded in death by his Mother, Leola Forriester Robertson (Walter Robertson), Father, Johnnie Forriester, Sister, Peggy House, and Brother, Charles Forriester. He is survived by his wife of 59 years, Charlotte Forriester, daughter Ronda Barron, and son Johnny Forriester (Sharon), 3 grandchildren: Raylan, Hollyn, Jaxen Forriester and several nieces and nephews. The visitation will be from 12:30 PM until 2:00 PM, Wednesday, October 21, 2020, at Peoples Chapel Funeral Home. The funeral service will be at 2:00 PM at the Funeral Home, with Wayne Honeycutt officiating. Burial will follow at Highland Memorial Gardens.

Jimmy C. Forriester, 83, of Hueytown, Al. passed away October 16, 2020. Jimmy was a graduate of Hueytown High, class of 1956. He served 3 years in the Army, stationed at Fort Hood, TX., returning to Hueytown Ala., marrying the love of his... View Obituary & Service Information

The family of JIMMY C. FORRIESTER created this Life Tributes page to make it easy to share your memories.

Send flowers to the FORRIESTER family.