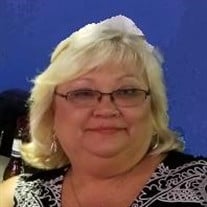 Janet “Jan” Ross Craft, 64, went to be with her Heavenly family at approximately 1:00 PM, Sunday, August 18, 2019, in Baldwin County. Jan was born on November 10, 1954 in Birmingham to Laura and the late Alvis Ross both of Hueytown, AL. She graduated from Hueytown High School in 1973 and had a 28 year career as a legal secretary for the attorney, Andre M. Toffel, P.C. She married Thomas (Tim) Craft August 12, 1977 and they lived in Pleasant Grove, AL for 33 years before moving to Foley, AL in 2019. They celebrated their 42nd Wedding Anniversary August 12. Jan and Tim welcomed two daughters to complete their family and later had the joy of being "Papa" and "Nanny" to 3 precious grandchildren. Jan is preceded in death by her beloved father, Avis Ross. She is survived by her husband Tim Craft; two daughters Kelly Craft Rutledge (Lane), and Kendall Craft Blevins (Matt); grandchildren Logan, Jake, and Kinsley; mother Laura Ross; sister Lynn Ross Culp; two brothers Mike Ross (Lanaye) and Ken Ross (Connie); and many in-laws, cousins, nieces, nephew, friends and family that are too numerous to list but are held close to our heart. The visitation will be Thursday, August 22, 2019 from 5:00 PM until 7:00 PM at Peoples Chapel Funeral Home in Hueytown, AL. Graveside services, lead by longtime family friend Rev. Mac Buttram, will be at 11:00 AM, Friday, August 23, 2019, at Hopewell Cemetery, 2170 Co Rd 599, Hanceville, AL 35077, in Cullman County. The family wishes to extend their sincere thanks and deep gratitude for all expressions of sympathy and acts of kindness shown during this time of bereavement.

The family of JANET "JAN" ROSS CRAFT created this Life Tributes page to make it easy to share your memories.

Send flowers to the CRAFT family.