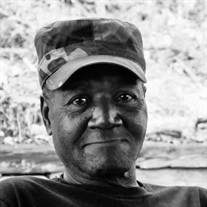 Hawood Eugene Willis was born to Sam and Maggie Willis on June 19th, 1948 in Glen Allen Mississippi. At an early age he was a hard worker, he worked out in the fields, logging and other jobs to help his parents and raise his brothers and sisters. He always loved tinkering with stuff and making new things. Something he did as a child all the way up to the end. In his 20s He left Mississippi and landed in Omaha NE. He worked at the Omaha Paper stocks, Holiday Inn Central as chief engineer, and final employment at Nebraska roads department until his retirement in 2015. In the 70’s he met the love of his life Beverly Ann Garringer and had a daughter, Ronda on August 4th, 1979. He even was a stepfather to Beverly’s two other daughters Debbie Ann and Karla Jean Garringer. In 2015 He packed up and moved to Hueytown, AL to live with his daughter Ronda Brasher and her family. For 6 years of his retirement, he enjoyed hunting, fishing, crafting, learning new technologies, playing and teaching his grandchildren (Angellia Palazola, Logan Brasher and Ian Brasher) different little projects to stars and nature. Every day was filled with laughs, tears but joy because he was surrounded by his loving family. He got to meet his Great Granddaughter Chloe A. Champion on June 4th, 2020. He was overjoyed to be able to see 4 generations live on. His daughter helped him with his doc visits made sure his time on this earth was fun and as comfortable as possible. Hawood peacefully passed away in his sleep on January 7th 2021 in the early am, surrounded by a home of warmth and love. Hawood is preceded in death by his father Early Sam Willis, mother Maggie Willis, brother Earley Willis, Jr, sisters Ida fox Willis-Clark, Pearline Bell, and his Wife Beverly Ann Garringer. He is survived by his brothers Henry Willis, Sam Willis and Walter “Sonny” Willis; sisters Wille Mae Fox, Elizabeth Brown, Bessie Hill, and Catherine Preston; daughter Ronda J Brasher (David W Brasher); grandchildren Angellia Palazola (Jason Champion), Logan Brasher and Ian Brasher; great granddaughter Chloe A. Champion; step daughters Debbie A Garringer, Karla Parsons (Ed); best friends John Heeren (Barb), Tanya Smit (Justin), and Tiffiany Wells from Omaha NE; plus many other family members, nieces, nephews and cousins from all over the US.

Hawood Eugene Willis was born to Sam and Maggie Willis on June 19th, 1948 in Glen Allen Mississippi. At an early age he was a hard worker, he worked out in the fields, logging and other jobs to help his parents and raise his brothers and sisters.... View Obituary & Service Information

The family of HAWOOD EUGENE WILLIS created this Life Tributes page to make it easy to share your memories.

Hawood Eugene Willis was born to Sam and Maggie Willis on June...

Send flowers to the WILLIS family.