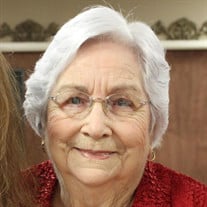 Frances Paralee Moats passed away peacefully on August 29th, 2021, at her residence in Woodstock, AL. She was 95 years old. Born Nov. 25, 1925, she grew up during the Great Depression and experienced the struggle of surviving poverty. She married at a young age, and had 10 children, which she considered a “pure pleasure” to her. Her stories of resilience over hardship could fill a book. She was a hard worker, never hesitating to provide for her family. Putting others first extended into her community, where she gained a reputation for mothering anyone who needed it, and became known as “Grandma” to many. All who knew her loved her. She was known as a gifted cook and loving matriarch. She was a strong, graceful survivor. But the title she treasured most was “Momma” and “Grandma.” She considered herself the richest person in the world because of all the love she had from her big family. She found peace in knowing that her children would look out for each other and love each other. She knew the Lord as her Savior and found great peace in knowing Him. Frances was preceded in death by her parents, Ethel Mae and Odell Majors; her husbands Bill Carroll and Earl Moats; her sister Marie Reach; her brothers Doug Majors, Doyle Majors, Tom Majors, Glenn Majors; her son David Carroll and daughter Debbie Carroll; stepsons Billy Jack Carroll and Johnny Carroll; her grandchildren Dewayne, Troy, Elaine, and Trigger She is survived by her brother, Roger Majors; sisters Barbara Coggins (Charlie) and Jewel Lawley; her sons George Carroll (Denise) and Rick Carroll (Sherri); her daughters Etta Mae Walker, Linda Gentry (Doug), LaVonne Humphryes (Kelley), Sharon Majors (Larry), Cathy Carroll Seagle (Tommy), and Teresa Walker (Leotis); her grandchildren Colean, Roxie, Tami, Jeannie, Jeremy, Billy Jack, Tom, Sherry, Frankie, Hank, Timothy, Tonya, Julie, Gavin, Regina, Wayne, Rebekka, Bill, Marcia, Bonnie, Billy, Jimmy, Angie, Crystal, TJ, Steven, and Ricky; 146 great grandchildren A funeral service will be held at Peoples Chapel Funeral Home, 195 Brooklane Drive, Hueytown, AL on Thursday, September 2, 2021 at 11:00, with Robert Smith officiating. Visitation for immediate family begins at 9:30, and for friends at 10:00. Burial will be at Hebron Cemetery following the service

Frances Paralee Moats passed away peacefully on August 29th, 2021, at her residence in Woodstock, AL. She was 95 years old. Born Nov. 25, 1925, she grew up during the Great Depression and experienced the struggle of surviving poverty. She married... View Obituary & Service Information

The family of FRANCES PARALEE MOATS created this Life Tributes page to make it easy to share your memories.

Send flowers to the MOATS family.