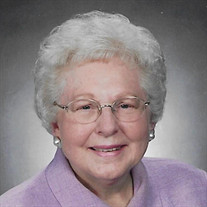 Esther Towers, born Esther Lynn Caine, age 96 went to be with the Lord on December 5, 2020.  Esther was born August 18, 1924 in West Blocton, Alabama, to Irving Durand Caine and Ruth Scott Caine.  She was the eldest of five children. Esther lived in Hueytown most of her life, and she was one of the first cheerleaders at Hueytown High School where she graduated in 1942.  She married Okie Towers that summer,  and they had four children over the course of fourteen years.  She was active in the HHS Alumni Association and enjoyed planning and attending class reunions.  She created beautiful quilts that garnered several prize ribbons.  When Esther received Jesus Christ as her savior, she was inspired to write her testimony to share with others.  After that she wrote poetry and other stories including the story of her husband and herself while they were separated by WWII.  She continued writing stories to share wih her family and friends.  She loved her church and community and was active there for many years until Okie became ill.  She and Okie traveled the US together and Europe with a dear cousin and her husband. Esther loved and was loved by her family who will miss her caring heart and great sense of humor.  She was preceded in death by her parents, husband of 74 years Okie Towers,sister Frances Spencer, brother Tom Caine, and daughter-in-law Sherry Towers. She is survived by her sons Jan Towers and Ron Towers (Sissy);  daughters Gail Novak (Gary), Nancy Roberts (David); grandchildren Wanda Towers (Mike), Christy Cochran (Lance), Jeff Towers (Karen), and Cory Kent (Jennifer);  great grandchildren Kenzie Calhoun, Alyssa Calhoun, and Brandon Towers; great- great granddaughter Harlee Hall; brothers Jimmy Caine and Harold Caine (Delle); sister-in-law Barbara Caine; numerous nieces, nephews, friends, and neighbors. The visitation will be Tuesday, December 8, 2020, from 10:00 AM until 11:00 AM, at Peoples Chapel Funeral Home.  The funeral service will be at 11:00 AM at the Funeral Home, with Rev. John Simmons officiating.   The burial will follow at Highland Memorial Gardens. Special thanks to her caregivers over the last five years and the Hospice.  And a special thanks to special friends Pat and Janice.

Esther Towers, born Esther Lynn Caine, age 96 went to be with the Lord on December 5, 2020.  Esther was born August 18, 1924 in West Blocton, Alabama, to Irving Durand Caine and Ruth Scott Caine.  She was the eldest of five children. Esther... View Obituary & Service Information

The family of ESTHER TOWERS created this Life Tributes page to make it easy to share your memories.

Send flowers to the TOWERS family.