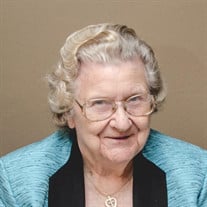 Edith Mae Ritch Brasher, of Hueytown, passed away December 5, 2018. She was born September 5, 1921 in an Acmar Mining Camp, in St. Clair county. She was raised in Acmar, Blue Mountain, Eden, Overton, and Moody with eight siblings: four brothers and four sisters. In September of 1945, she was married to Morese Brasher. Not only has Edith had success in her personal life but in her profession life as well. In 1972 she entered into the Cabinet Makers Apprentice Program to become a journeyman cabinet maker. Although it usually takes four years to complete the program, she became a journeyman cabinet maker in September 1975. Edith received many accolades for her accomplishments. In January of 1976 she was in a magazine article “Alabama Grandmother Prefer Cabinet Making to Crocheting.” Also in March of 1976, there was another article in Women and Work Magazine titled “Alabama Grandmothers Employed as Cabinet Makers.” Along with the magazine articles, she also received a letter from the Mayor of Birmingham, George C. Seibels, Jr., complimenting her for completing the apprenticeship program. Edith was still building cabinets when she was 75 years old and was the oldest female cabinet maker in the state of Alabama. She managed an apartment complex from 1995 until she retired in August of 2013, at the young age of 92. Edith was preceded in death by her husband Morese “Buddy” Brasher; daughter Cary Evelene Brasher; parents Arthur Z. and Cary Seale Ritch; brothers Arthur J. Ritch, Bill Ritch, Ray Ritch, and Doyle Ritch; sisters Cleo Palmer, Vera Dale Morgan, Margaret Ritch, and Gay Nell Ritch; and great grandchild Xander Brasher. She is survived by her children Morese Brasher, Jr. (Marjorie), Roger Brasher (Debbie), Wendy Wood (Byron), and Rusty Brasher (Ginger); 12 grandchildren; 16 great grandchildren; and 4 great-great grandchildren. The visitation will be Friday from 5:00 PM until 7:00 PM at Peoples Chapel Funeral Home. The funeral service will be Saturday, December 8, 2018, at 2:00 PM, at the Funeral Home, with Rev. Buddy Poe officiating. Burial will follow at Allen Cemetery on Highway 119.

The family of EDITH MAE BRASHER created this Life Tributes page to make it easy to share your memories.

Send flowers to the BRASHER family.