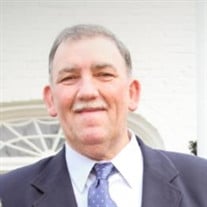 Donnie Ray Goodwin Sr., 68, of Birmingport AL, went home to the Lord on Friday September 17, 2021. He was the lifelong sweetheart to his wife, Tommie Lou Goodwin of Birmingport, proud daddy to his two sons and pushover to his six grandkids. He was a Christian. He was a graduate of Oak Grove High School (Class of 1971) and he retired from Jefferson County as a Surveyor and Crew Chief after 31 years in 2006 - although during and after he continued to work many part-time jobs. He was extremely selfless and continuously sacrificed for his family. Once he finally did completely stop working, he spent all his time providing for, taking care of and enjoying the people he loved. He was big teddy bear with a heart of gold. You will never meet a sweeter man that you just knew you better not cross. He loved old cars and especially loved Ford Falcons (his first car in 1968 was a 1965 Falcon). He loved Auburn, initially because Tommie Lou loved Auburn but later because his money and his son went there. He was a hopeless romantic and loved Tommie Lou with every fiber of his being until the day he left this earth. His love, legacy and gentle nature will live on in all the lives that he touched. Donnie was preceded in death by his parents Ronnie and June Goodwin; brothers Rodney & Ron; sister Teresa Thornton; sister-in-law Vikki Goodwin; grandchildren Jett & Campbell and his grandparents Dewey and Marie Davis; grandmother Euda LaTourneau. He is survived by his wife of 50 years, Tommie Lou Goodwin; 2 sons Don (Jennifer) and Shane (Brandi); brother, Terry (Vicki, deceased) Goodwin; sister-in-law Karen (Rodney, deceased); adored grandchildren, Justin, Jonathan, Kaitlyn, Chance, Memphis & Ryman; uncle Buddy (Linda) Davis and a host of nieces and nephews; dear friend Calvin Parker. The funeral service will be at Peoples Chapel Funeral Home Tuesday, September 21st at 11:00 AM, with visitation from 9:30 AM until 11:00 AM Buddy Price will be officiating. He will be laid to rest at Oak Grove Community Church with many of his family. Pallbearers: Clay Goodwin, Bo Hicks, Jason Goodwin, Justin Peyton, Jonathan Goodwin & Noah Goodwin

Donnie Ray Goodwin Sr., 68, of Birmingport AL, went home to the Lord on Friday September 17, 2021. He was the lifelong sweetheart to his wife, Tommie Lou Goodwin of Birmingport, proud daddy to his two sons and pushover to his six grandkids.... View Obituary & Service Information

The family of DONNIE RAY GOODWIN SR. created this Life Tributes page to make it easy to share your memories.

Send flowers to the GOODWIN family.