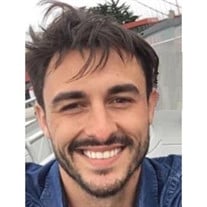 Davey Thomas Tucker welcomed music into his life at an early age when he uncovered his grandmother’s (Meemaw) passion for songwriting. Davey was raised by both his mother and his grandmother, which meant his life was spent living with music. Davey's passion for music began in middle school when his grandmother purchased his first clarinet from the local Wal-Mart. Soon after, he and his cousin joined Drum Corps International touring with Spirit Drum and Bugle Corps; the following season, Davey joined the seven-time World Champions, The Cavaliers, and in 2013 he aged out with the nineteen-time World Champions, The Blue Devils. Rooted deep in his family’s history of music, Davey pursued the art of narrative as communicated through the language of music at the University of Alabama at Birmingham in 2011 and was later accepted to the Berklee College of Music in Boston, MA, where he began his dream career in film scoring. Davey worked as an accomplished multi-instrumentalist and composer, exploring an embracing all path of story-telling with composition, songwriting, and performance. His critically acclaimed works include his original scores for A&E/Lifetime Network’s 2016 Television series Fall Into Me, PBS Digital Studio’s VR short film My Brother’s Keeper, and Atlanta rapper Trouble’s short biography Edgewood. He composed and prepared music for television and movies, including Family Guy, Mary Poppins Returns, Fifty Shades Freed, and Ferdinand. He has also sold out concert performances with renowned group Pink Martini at Boston’s historic Symphony Hall and Walt Disney Concert Hall in Los Angeles, California. Davey loved spending time with family He was very close to his mom, his aunt Marci, aunt Janna, and his cousin Ashlee. Davey enjoyed sharing videos of his family, whether they actually approved or not. Davey was a joy to be around and never met a stranger. People loved to be around him because he made you laugh and feel happy. He captured a treasure-trove of memories that will never be forgotten and will always be cherished in our hearts forever. Those we love don't go away; they walk beside us every day, unseen, unheard, but always near. Still loved, still missed, and very dear. Davey was a mentor, a friend, an inspiration, a brother, a son, a grandson. He had a contagious positivity that touched so many people’s lives, and he will be missed tremendously by us all. Davey is preceded in death by aunts and uncles Lisa Molde Bullock (John), and Matt Smith. He is survived by his mother Kristina Molde Tucker Boley (Tim); father Michael Thomas Tucker; brothers Michael Robbie Tucker, and Jeffrey David Earl Tucker (Debbie); grandparents Cheryl Vines Smith (Bill), Harold Georg Molde (Ev), Tommy Tucker (Wanda); aunts and uncles Marci Molde Wall, Janna Molde Lewis (Donnie), Wes Smith (Andrea), Pat Short, Genne Tucker, and several more; cousins Amber Lewis, Stephen Smitherman, Andrew Smith, Ashlee Lewis, Zack Davis, Billy Dixon, Chase Ezell (Allyson), Cody Dixon, Donnie Lewis II, Kylie Layton (Christian), Will Smith, Randy Earl Lewis, and more. The visitation will be from 9:30 AM until 11:00 AM, Wednesday, September 9, 2020, at Peoples Chapel Funeral Home. The graveside service will be at 11:30 AM at Liberty Baptist Church Cemetery, Alliance, with Brother Freddy Pendley.

Davey Thomas Tucker welcomed music into his life at an early age when he uncovered his grandmother&#8217;s (Meemaw) passion for songwriting. Davey was raised by both his mother and his grandmother, which meant his life was spent living with... View Obituary & Service Information

The family of DAVEY THOMAS TUCKER created this Life Tributes page to make it easy to share your memories.

Davey Thomas Tucker welcomed music into his life at an early...

Send flowers to the TUCKER family.