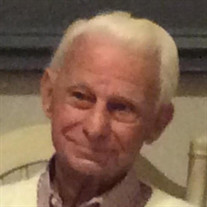 Conrad Wayne Crocker, age 85, passed away on March 17, 2021. He was a loving husband, devoted father and grandfather. He was born on April 1, 1935 in Marengo County to Belton and Mattie Crocker. He grew up in Thomaston, AL and later moved to Garywood, AL and graduated from Hueytown High School in 1953. He retired from U. S. Steel after more than 40 years of service and then worked for Bartow Steel for about 10 additional years selling steel, traveling extensively. Conrad was preceded in death by his parents, Belton and Mattie Crocker and his brother Maurice Crocker. He is survived by his loving wife, Peggy Ford Crocker; his children, Greg (Cindy) Crocker, Belinda (Robert) Russian; his sister, Barbara (Junior) Amick; his grandchildren, Courtney (Chad) Cox, Robert Corey Russian, Kayla Russian; and three great grandchildren. Conrad grew up working on farms in south Alabama and certainly knew about a hard day’s work. Conrad was such a wonderful husband and father always placing the needs of his wife, children and family first in his life. He loved all things Auburn and tailgating with family and friends. He was an avid gardener, enjoyed working outdoors and had a green thumb with flowers and plants, as did his mother before him. He also loved fishing, especially for crappie, with his family. It was a rare day in Conrad’s life that he said a bitter or bad word about anyone and he will be greatly missed. A graveside service will be held at Forest Grove Memorial Gardens in Pleasant Grove, AL at 11:00 a.m. on Monday, March 22nd. In lieu of flowers, please send a donation to the Tigers Unlimited Foundation in memory of Conrad Crocker.

Conrad Wayne Crocker, age 85, passed away on March 17, 2021. He was a loving husband, devoted father and grandfather. He was born on April 1, 1935 in Marengo County to Belton and Mattie Crocker. He grew up in Thomaston, AL and later moved... View Obituary & Service Information

The family of CONRAD WAYNE CROCKER created this Life Tributes page to make it easy to share your memories.

Send flowers to the CROCKER family.