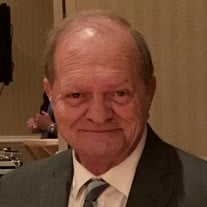 Carmelo David “Sonny” “Carl” Musso, age 77, Hueytown, Al., passed away April 20, 2019. He was a long-time member of Earnest United Methodist Church. He attended Bessemer School System, 1947-1960, and the University of Alabama at Birmingham, 1975-1976 Emergency Medical Technician instructor for Bessemer State Technical College, 1978-1984. He served as a member of the Alabama National Guard 1960-1966. He retired from Bessemer Fire and Rescue Service after 30 years of service. Promoted to the rank of Deputy Fire Chief in 1992. He was a past president of Bessemer Fire Fighters Association Local 980, past president of the Alabama Joint Fire Council, served 3 terms as a Trustee with the Professional Firefighters of Alabama and received the "Jim Clinton Award", for outstanding service to the PFFA in 1985. Assisted in organizing Concord Volunteer Fire Dept. and helped establish their Emergency Medical Rescue Service. Served as a member of the Concord Fire District Board and received the "Harry Barton Award" for outstanding service to the Department. Served on the Alabama State Fire College Advisory Board, Alabama Fire Chiefs Assoc., National Fire Department Safety Officers Assoc, served on the Bessemer Emergency Medical Service Board, and was awarded "Firefighter of the Year" by the Bessemer Kiwanis Club in 1976. He was preceded in death by his parents Jack J. and Nell M. Musso; sister Mary A. Keith. He is survived by his wife Sue Hays Musso; children Jeff Snider, Tracy Hawk (Robbie), Carla Ash (Mickey), Karen Harris (Travis), and Steve Benson (Sherri); grandchildren Jessica Bonnett, Justin Bonnett (Taylor), Amelia Snider, and Anna Snider. The visitation will be Tuesday, April 23, 2019 from 11:00 AM until 12:30 PM, at Peoples Chapel Funeral Home. The funeral service will be at 12:30 PM at the Funeral Home. The burial will be at Earnest United Methodist Cemetery.

The family of CARMELO DAVID "SONNY" "CARL" MUSSO created this Life Tributes page to make it easy to share your memories.

Send flowers to the MUSSO family.