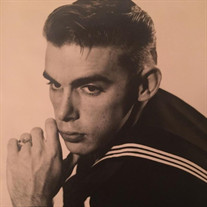 Carl Bruce Webb, 84, resided in Hueytown, Alabama. He was born on a snowy day February 7, 1936 to parents Clyde and Bessie Webb in Carbon Hill, AL. At an early age he came to know and trust his Lord, Jesus. His servant’s heart led him to join the U.S. Navy in 1955 on the USS Ajax. After finishing his tour, he met wife, Carolyn Faye Jones, on a blind date. “I’m going to marry her if she will have me,” he said just after their first date. Almost sixty years later, he not only followed through on that statement but upheld his vows to the fullest; he was known for his deep love and devotion. Carl was a member of Hueytown Church of Christ and lived his life as he saw pleasing to the Lord. His love for his Savior was immeasurable and was shown clearly in his example, sweet demeanor, and genuine loyalty. Carl was easy to love and was respected and cherished by his family and friends. Carl lived through many struggles in his life but overcame even some of the toughest circumstances. He lost his mother at the age of sixteen, triumphed over four different types of cancers, and defied the odds of a Parkinson’s diagnosis for fifteen years. Through every trial he pushed forward, kept his faith, and trusted in God. He has now shed those struggles and is completely healed. We thank the Lord for our Daddy and celebrate a life well-lived. He has taught and guided not only us but every person he came into contact with. Though his absence leaves a hole in our family that will never be filled, we live with the hope that we will one day see him again in glory. For the rest of our days we will be proud of the life he led and show our love for him by honoring his example. He is preceded in death by: his parents—Clyde and Bessie Webb; father-in-law and mother-in-law—Louie and Velma Jones; siblings—Sally Clark, Ray Webb, Jimmy Webb, and Lynda Lou Webb; brother-in-law—Jimmy Jones; and sister-in-law—Dorothy Powell. He moved on from this broken world the morning of Wednesday, May 27th, 2020. His beloved he left include: wife Carolyn Webb ; children—Bruce (and Sheryl) Webb, Kimberly (and Keith) Taylor, Stacy (and Greg) Whited; grandchildren—Lacie (and Chase) Butler, Kolby (and Angela) Taylor, Karson (and fiancé, Lydia) Taylor, Austin and Autumn Stacks, Lauren (and Chris) Mercer, Marybeth Flack; great grandchildren—Ava Sullivan, Knox and Kenley Taylor, Lux Mercer, Ari Flack; brother-in-law—Buddy (Gail) Jones sister-in-law; Joyce Webb and many nephews and nieces. There will be a private service with burial to follow at Alabama National Cemetery in Montevallo.

Carl Bruce Webb, 84, resided in Hueytown, Alabama. He was born on a snowy day February 7, 1936 to parents Clyde and Bessie Webb in Carbon Hill, AL. At an early age he came to know and trust his Lord, Jesus. His servant&#8217;s heart led him... View Obituary & Service Information

The family of CARL BRUCE WEBB created this Life Tributes page to make it easy to share your memories.

Carl Bruce Webb, 84, resided in Hueytown, Alabama. He was born...

Send flowers to the WEBB family.