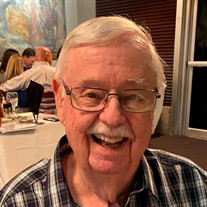 Bob Morgan, 87 ,born June 16, 1934 in Trinity (Morgan County), Alabama, passed away December 11, 2021, in Birmingham, Alabama. He most recently resided in Hueytown, Alabama. He was best known for his love of God, family and friends, Patriotism, his Miniature Schnauzers, and Alabama Crimson Tide Football. He attended Concord Baptist Church along with his family and many friends. His love of our Country comes from his time serving in the Air Force and subsequently the Alabama Army National Guard. Upon graduating from Morgan County High School in 1952, he entered the Air Force and served as a pilot during the Korean War. An Honorable Discharge from the Air Force was received in 1962, after which he joined the Police Force in Huntsville, Alabama. He had the distinguished honor of being the first Director of the Alabama Fraternal Order of Police. Bob then went on to be a Fraud Investigator with the State of Alabama, Department of Industrial Relations. He served as a Sergeant First Class in the 1157th CID with the Alabama Army National Guard for fifteen years, retiring in 1994. He ended is career with the State of Alabama as the Manager of the Midfield location of the Employment/Unemployment office in 1994.He is preceded in death by his father, Thomas Arthur Morgan, his mother Cynthia Velma Morgan, and eight of his brothers and sisters. He has left to cherish his memory, his wife of 44 years, Marty Morgan, his younger sister, Bonnie Morgan Sellers, his sons, Bert Wiens (Sandra) and Michael (Lea), his daughters, Lisa Morgan Howe (Michael), Heather Youmans, and Jenny Stanley (Brad). His grandchildren, Melissa Wiens Patocka (Mark), Sarah Wiens Green (Kyle), Daniel Wiens, David Wiens, Dallas Wiens, Carson Howe (Kelsey), Colvin Youmans, Elizabeth Youmans, Riley Stanley, and Sam Stanley. As well as many great grandchildren. Visitation will be held at Concord Baptist Church, 5951 Warrior River Road, Hueytown, Alabama 35023, from 10:00 to 11:30. Funeral will follow at 11:30, with graveside in the church cemetery. The family requests donations be made to Schnauzer Love Rescue, Inc. in lieu of flowers .Schnauzer Love Rescue Inc.2924 19th Street North Hueytown, Alabama 35023 PayPal.com @[email protected]

Bob Morgan, 87 ,born June 16, 1934 in Trinity (Morgan County), Alabama, passed away December 11, 2021, in Birmingham, Alabama. He most recently resided in Hueytown, Alabama. He was best known for his love of God, family and friends, Patriotism,... View Obituary & Service Information

The family of BOB MORGAN created this Life Tributes page to make it easy to share your memories.

Send flowers to the MORGAN family.