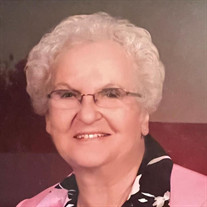 Betty Jones Heatherly, age 89, of Hueytown, AL., passed away January 15, 2022. She was a member of Valley Creek Baptist Church. She was a graduate of Hueytown High School class of 1950. Betty was employed by the Jefferson County School System at Hueytown High School. She served as secretary to the principal from the early 1970’s, until her retirement in 1994. She had many close relationships with her co-workers at the high school. Her primary role was secretary to the principal, but she supported the staff and students in different ways. Back when she was working, there were no laptop computers, everything was put on a spread sheet manually with pen and pencil. She always called it “balancing the books”. She also handled the athletics department expense books. She sold football tickets at the gate on Friday nights. Betty was preceded in death by her husband of 56 years Harless E. “Buddy” Heatherly, Sr., daughter Charlotte Leslie, son Michial Heatherly, parents Lillian and Euel Jones, sisters Elizabeth Jones, and Mary Coker; and brother Harold Jones. She is survived by her children Harless E. Heatherly, Jr. (Patricia), Stephen Heatherly (Amy), Glenn Heatherly (Gersan); grandchildren LaNaye, Alex, Madison, and Kaden; great grandchildren Nolan and Cameron; brother Johnny Jones (Vickie); sister-in-law Sandra Jones; numerous nieces, nephews, and special friends. The family would like to give a special thanks to Betty’s caregivers, Tiwanna “Taco Bell” Jackson, Christy Monk, Mable Rodgers, Cindy Roberson, and Catherine Spencer. The visitation will be Wednesday, January 19, 2022 from 10:00 AM until 11:00 AM at Peoples Chapel Funeral Home. The funeral will be at 11:00 AM at the Funeral Home, with Bro. Bob Weber and Bro. Kevin Blackwell officiating. Burial will follow at Valley Creek Cemetery.

Betty Jones Heatherly, age 89, of Hueytown, AL., passed away January 15, 2022. She was a member of Valley Creek Baptist Church. She was a graduate of Hueytown High School class of 1950. Betty was employed by the Jefferson County School System... View Obituary & Service Information

The family of BETTY JONES HEATHERLY created this Life Tributes page to make it easy to share your memories.

Send flowers to the HEATHERLY family.