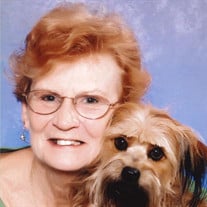 Barbara Eileen Bouder, age 79, of Birmingham, Alabama, returned to her heavenly home, suddenly, on Thursday April 4th, 2019. She moved back to Birmingham, a few years ago, to be closer to family and to live with her daughter. She quickly... View Obituary & Service Information

The family of BARBARA EILEEN BOUDER created this Life Tributes page to make it easy to share your memories.

Send flowers to the BOUDER family.