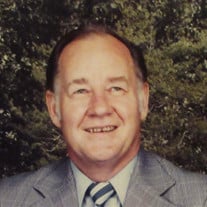 Alex Michael Bobulinski, 97, died peacefully on December 1, 2019 in Pleasant Grove, Alabama. He was born on February 26, 1922 in Central City, Pennsylvania; the son of Charles and Julia (Kawala) Bobulinski. An early event in his life shaped Alex for the remainder. At age 13, his Dad was critically injured in a coal mining accident and cared for at their Central City home. Upon direct request from his dying father, Alex was chosen to change the bandages and administer care until his father passed away. At this point, young Alex becomes acting Head of Household caring for his Mother and siblings. Alex graduated High School in Central City; played football on H.S. team, and was considered for a South Carolina college scholarship; listed in H.S. yearbook as Most likely to Succeed and Best Looking (‘Hercules’ physique). He did not attend college after high school but instead went to work in the coal mines with his two older brothers, Mike and Joe (both deceased) to help support the family. (Alex is from a large family of twelve children: five girls - Mary, Josephine, Helen, Sophie, and Betty and four boys: Mike, Joe, Alex, and Stan. Three children died early – Charles, Geneviève, and Joseph.) Eventually, he left the mines and followed his brother Joe to NYC where he met, Susan Labant, at Bickford’s diner in midtown NYC. They fell in love planning to be together as World War II begins. The relationship got put on hold as Alex joined the US Army Air Force. He rose to the rank of Staff Sergeant and managed a hotel in Iceland through the war (for soldiers, celebrities traveling to and from the US). Upon his return to US, he married Susan and they began a long journey through life, happily married for 66 years until Susan’s passing in 2011. Living in Flushing, Queens, NY, they had a son Robert (9-7-1967 to 12-1-2015). Alex began work for the Bell Telephone system, worked at Wallach’s Men’s Stores and attended New York University at night where he graduated with a Bachelor of Science in Business Management. The next move was to South Ozone Park, Queens, NY and they had two more sons – Gregory (12-1-1950 to present) and Stephen (10-26-1951 to present). Their next home was in East Meadow, Long Island, NY where they were among the first group of commuters to move to Long island. He commuted to NYC for over 20 years and then moved to Bridgewater, New Jersey where he works for A.T.T. when the company moves its headquarters to Basking Ridge, New Jersey. Alex worked his way through the telephone company hierarchy and was promoted to Operational District Manager. Before retirement, he was offered an Assistant Vice-President at A.T.T. which he passed on and made a decision to retire. Al retired at age 56 and moved to Palm Harbor, Florida where he lived for the next 40 plus years. While in retirement, Alex did private consulting work for Puerto Rico Telephone Systems for 10 years radically improving their telephone operations/revenues. Throughout his life, Alex was active in the church, a member of the Telephone Pioneers of America, and was involved with the Boy Scouts of America. His hobbies included: bowling, polka dancing, card games, word puzzles, complicated jigsaw puzzles, and painting by number artwork. He regularly donated to charities: local churches, Boys Town, Paralyzed Veterans, St. Labre’ Indian School, Benedictine and Marianist Missions. Alex leaves two sons – Gregory and Stephen, five grandchildren, and three great grandchildren. Following his last wishes, a funeral service will be held on Friday, December 6, 2019 at 1pm at the Long Island National Cemetery, Section V, Site 604, 2040 Wellwood Avenue, Farmingdale, NY 11735-1211, phone - #631-454-4949. There will be no service at the funeral parlor or church service. Future Memorial Masses will be held in New York and Florida, where he lived most of his life. About Alex – “A True Amazing Success Story!” ……………….. Humble to the very end………………….Subtle and Thoughtful ………………… His principles were about: Moderation, Tolerance, Temperance, Compromise, Flexibility, and Balance………………………Not subject to rages or temper tantrums. THE BEST DAD ANYONE COULD EVER HAVE THROUGH ALL OF THE UP’S AND DOWNS OF LIFE. Requiescat in Pace (Rest in Peace) Dad. We loved you and are thankful to have had you for so long.

Alex Michael Bobulinski, 97, died peacefully on December 1, 2019 in Pleasant Grove, Alabama. He was born on February 26, 1922 in Central City, Pennsylvania; the son of Charles and Julia (Kawala) Bobulinski. An early event in his life shaped... View Obituary & Service Information

The family of ALEX MICHAEL BOBULINSKI created this Life Tributes page to make it easy to share your memories.

Send flowers to the BOBULINSKI family.